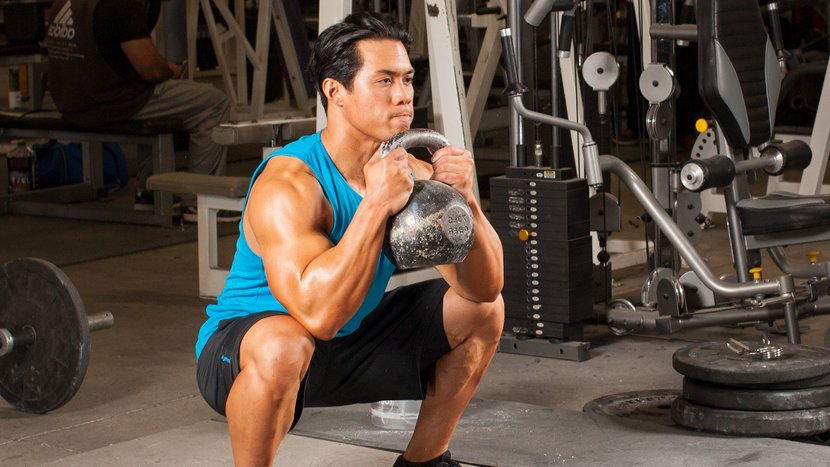 If you wince at the mere mention of the back squat, you’re not necessarily banished to the machines forever. Do these intelligent squat variations instead for pain-free progress in your lower-body training!

There’s no law declaring everyone, everywhere needs to squat to parallel with a maximally loaded barbell on his or her back to be considered a “real” lifter. But, it’s definitely an unofficial rule of the gym, and many promising lifters have been grounded as a result.

Here’s the deal: The longer you squat with piss-poor form and dogmatic loading schemes, the likelier you are to suffer pain, injury, and a lifetime of frustrations under the bar. If every session in the rack leaves you debilitated for days, or you struggle to break through strength and performance plateaus under the bar, it doesn’t mean you need to squat more—it means you are probably using the wrong squat variation for your body.

It’s time to knock the “king of lifts” off its throne. Yes, it can be a fantastic movement, but you shouldn’t feel obliged to do it if it’s beating you to a pulp. The only perfect squat is the variation that allows you to train hard, heavy, and pain free.

Here are my four go-to squat variations to bulletproof your leg workout and break through frustrating plateaus. Treat them as individual goals or as a progression leading up to the back squat, and you can’t go wrong.

The goblet squat is one of the most underrated variations in strength training. Sure, it’s usually a light-load, low-intensity movement, but there’s nothing keeping you from utilizing heavy loads to transform this exercise into a primary strength movement.

Most lifters feel more secure with the bar on their back, whether due to emotional attachment to the exercise or vain attempts to hide weak form. By requiring you to hold the load out in front of your body, the goblet squat removes you from the comfort zone of the back squat. This provides a more challenging environment for stabilizing loads throughout your range of motion, which is exactly what you need to improve strength and functionality.

Still think the goblet squat is just for sissies? Put 50 percent of your body weight in your hands and see how many reps you can get. If you can complete 25 unbroken reps with pristine form squatting to parallel, congrats, your functional squat is solid. If you struggle, it’s time to clean up those weak links before they bite you in the ass.

Most gyms have dumbbells ranging from 5-100 pounds. Challenge yourself by tapping into the full body tension and stability at the shoulders during the goblet squat, an effect usually absent in sloppy barbell work.

Placing a load out in front of your body and controlling it with your hands through a full squat is pretty damn challenging. In fact, even goblet squats may still cause pain and discomfort for impaired lifters. If this is the case, the landmine goblet squat is the perfect solution to allow squatting under load, without pain.

Set up your barbell for the landmine squat using specific equipment, or just snug the end of the bar against a corner of a room or rack and ensure that it is stable. There’s no need to add a shifting bar to an already shoddy squat.

Grab the barbell in your hands using the goblet position. You’ll notice right away as you start your descent that the trajectory, angle, and size of the barbell will force you back into your hips when you near the bottom range of motion of the squat. Good: That’s exactly what you need to fix your squat.

Many lifters are anterior chain dominant, meaning they shift forward on their quads and let their knees track too far forward during their squat. The landmine not only adds stability, because you are hanging onto the anchored bar, it also forces the load into the posterior chain—mainly the glutes and hamstrings—which further stabilizes the squat.

Get a feel for this movement by starting with a lighter load and squatting down from the top, just as you would a normal back squat. For heavier loading, use a plyo box to set the weights on and start at the bottom, monitoring range of motion as you gradually increase the load.

Now you’ve mastered both the dumbbell and landmine goblet squats. Congratulations! You’ve earned the right to step back in the rack and squat with the barbell. But rather than going straight for the back squat, the pain-free progression I recommend to reintroduce barbell training goes through the front squat.

What’s so special about front squats? They have some of the same benefits as the other front-loaded variations, but change the implement just enough to allow you to load heavier. Change only one variable at a time, ensuring you won’t fall back into the same lousy habits.

However, a front-squat problem I regularly see is the inability to front rack the barbell correctly due to shoulder and elbow pain, coupled with a lack of wrist mobility. So here’s the deal: Unless you are an Olympic lifter or CrossFit athlete planning to compete in these big lifts, the traditional front rack provides little to no advantage for getting strong and staying resilient against injuries. So skip it!

To replace the front-rack grip, attach two lifting straps directly to the barbell and hold them to achieve a neutral wrist position. This will give you the best of both worlds: loading the barbell in front of your body, while sparing your wrists and shoulders from pain or injury.

Remember, do not attach the straps to your wrists. Seriously—don’t! Connect the two straps directly to the barbell, then pull up on the straps with your hands on top of the bar during the setup in the front squat. This detail is very important, as I’ve seen some crazy setups over the years that are guaranteed to land you in the emergency room if the lift goes south.

The front rack gives you the ability to train the squat pattern with a more vertical torso position, which is generally better tolerated for lifters dealing with chronic lower-back pain and hip issues. To stay stable and safe in this position, though, you must squeeze your hands hard, place tension through the shoulder girdle and core, and control your lower body. If you can do that, you’ll get the most bang out of your pain-free squatting buck.

When returning athletes to the barbell back squat, two of the most powerful tools I routinely implement the are box squat setup and bands for accommodating resistance.

This simple addition of the box works wonders because it helps to stabilize the bottom range of motion during the squat, which is usually the most vulnerable position for injuries. The “hole” is where lifters regularly lose their core tension and compensate by losing the lumbar extension and flexing the lower back in what is commonly known as the “butt wink.” It’s also, by no coincidence, where they often feel that tell-tale “sproing.”

By using the box to unload up to 50 percent of your bodyweight for a split second at the bottom of your squat before exploding back up, you can maintain and increase stability through the entire range of motion and significantly reduce your risk of injury.

The barbell box squat is further improved by bands providing accommodating resistance. As you sit down into the squat on the box, the bands relax, with puts less tension on the load. As you drive up off the box, the bands stretch, placing more relative load through the bar and challenging the stronger portion of the range of motion, forcing you to accelerate the bar upward.

Train explosively as you raise up on the concentric and lower under control through the eccentric. Once you’ve mastered this exercise, you can shed the bands, and then the box. Before you know it, you’ll have revolutionized your squat performance.